SkyCity takes great care in protecting the environment through its Environment Strategy and Policy and through employee interaction across all SkyCity sites in order to create an effective 'green' working environment. 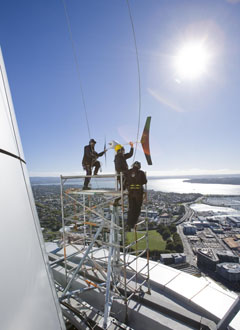 SkyCity Auckland has installed a Swift micro wind turbine on top of the Sky Tower as part of a trial undertaken by multi- infrastructure company Vector to test the latest technology in urban micro-wind generation.

The trial explores the part micro-wind turbines can play in the changing energy environment, particularly in the area of renewable distributed power generation.

SkyCity are participating to help increase the acceptance and adoption of the technology. Vector is fully funding the project, with SkyCity purchasing the electricity generated which is being used in our lighting circuitry, in particular the same supply that lights the outside of Sky Tower’s pod, aviation lights, public areas and stairways.

What does 'Eco' mean for SkyCity?

Each year 37,000,000 units of electricity are used to provide lighting and power to the entire SkyCity Auckland site. Our energy savings are now coming through in the increased efficiencies made from the various energy efficiency projects we have underway.

As one of the largest entertainment complexes in the Southern Hemisphere, SkyCity has an obligation to reduce the impact its activities has on the environment, and to demonstrate a sound environmental performance.

There are several large projects underway to improve our lighting, ventilation, cooling and heating. With the costs coming down in renewable resources, this along with natural gas consumption, is being considered as part of the improvements.

Read about the full commitment SkyCity is making to reduce the impact of its operations.

Qualmark is New Zealand tourism's official stamp of quality and professionalism, and now carries the extra weight of judging for environmentally and socially committed tourism operators.

For recognition in the international marketplace, SkyCity Auckland is affiliated to an international accreditation bureau Green Globe.

In addition, SkyCity Grand Hotel was awarded Qualmark’s Enviro-Gold rating in June 2009, the highest environment award available in New Zealand. This award recognises The Grand by SkyCity's movement towards environmental sustainability and their promotion of responsible eco-tourism in New Zealand.